About 3 and half years ago, I started my first pinball software rewrite. It was for my favourite game of all time -  Williams Indiana Jones. I have been using the P-ROC hardware and pyprocgame framework.

The game is pretty massive and it has been a major undertaking. The idea has always been to recreate the rules and then add on to them in a seamless way. I like the concept that once your done a regular player wouldn't be able to tell the difference between original rules and new ones, or modified mode screens etc unless someone points it out. A good example of this is where i added a 4th jackpot possibility to the main multi-ball mode for the 4th film. 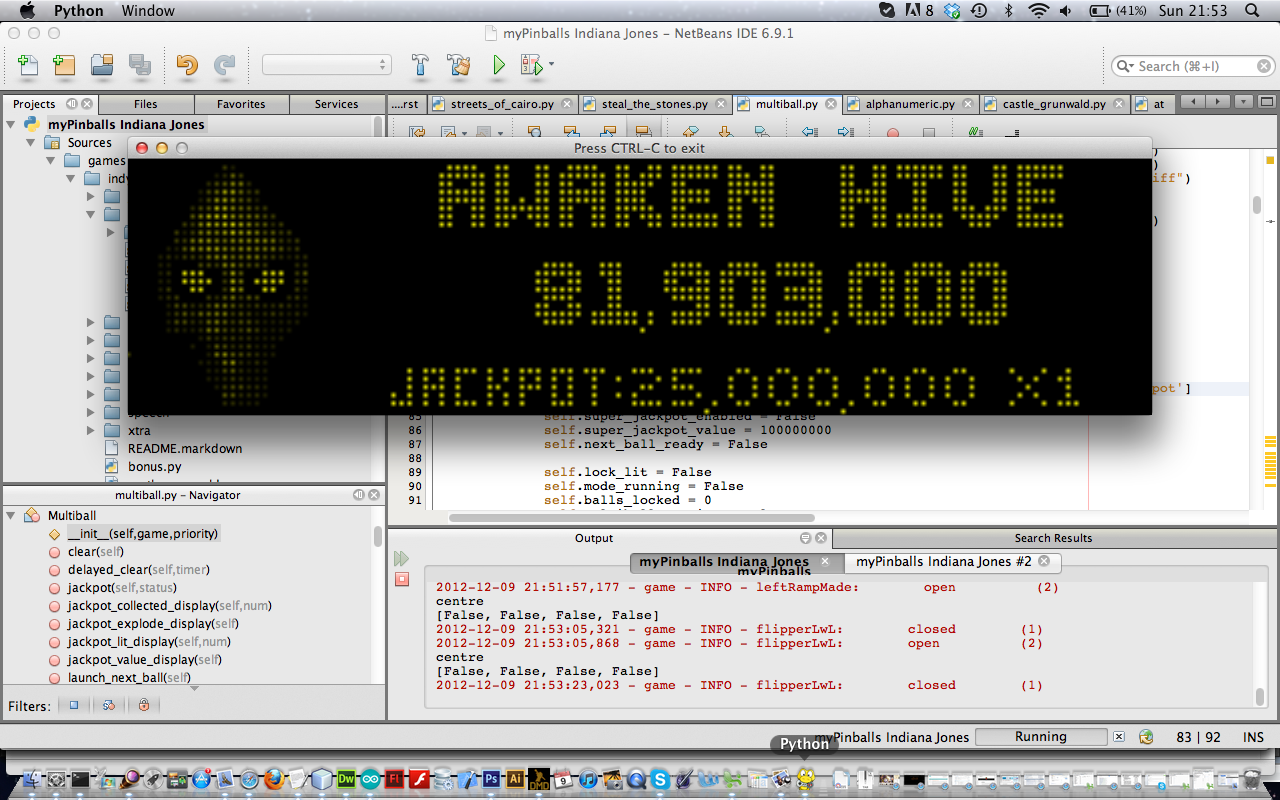 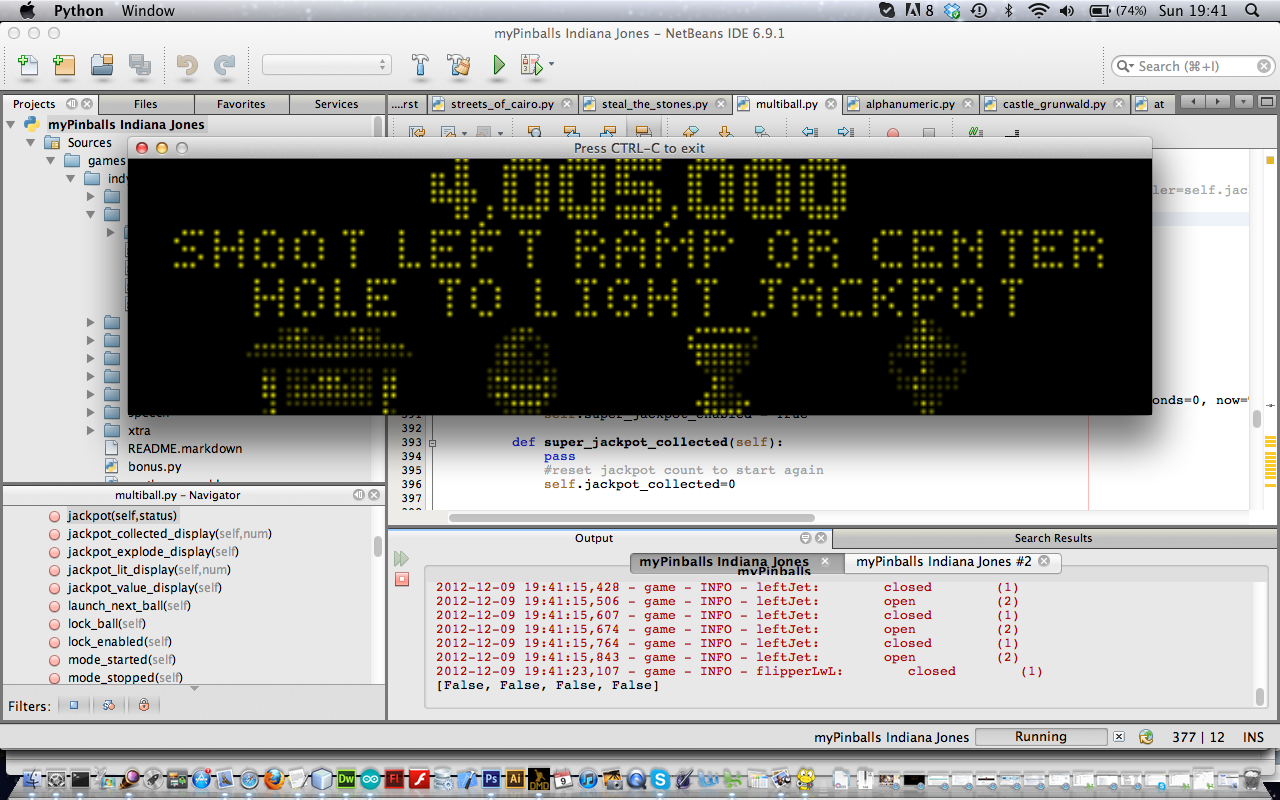 Now you have 4 jackpots to go for instead of the original 3. Pretty cool I reckon.

So when recreating a game its split into 3 main areas that you have to undertake. The DMD animation files, the game sounds/speech and of course the game code. All the dmd animations have to be recreated frame by frame and all the sounds calls extracted and edited. There are 12 modes and 2 multiball rounds along with the path of adventure and idol toys in the game, so it has taken along time to get to this point.

Here's another great feature of rewriting pinball software form the ground up, you can choose to add extra or secret modes tot he game wherever and whatever you fancy. I really like the video mode from Dracula so i'm adding that mode into my indy game as a secret/bonus mode for players to find.

Posted by myPinballs at 04:26 No comments:


Some pics of my rev2 cpu board for system 80b gottlieb games. This project has been ongoing for the last year and is finally coming to fruition. Everything is working lovely now and the final little niggle was worked out yesterday. I've been testing the operation of it for a while now and i think its pretty bullet proof. One has been running in my Gold Wings for around 6 months now.

Lots of improvements on the original design include:

Rev 3 boards will be finalised shortly and sent off to the manufacturer that i use. Turn around is usually within a few weeks. Deciding at the moment whether to add gold plated edge connectors. I am also thinking about adding a 40 pin ribbon cable attachment for linking up to other driver board replacements.

The above pic shows the first prototype board on the right hand side. Things have moved on a lot since then. I always think its good to have a proper prototype board to experiment on though rather than trying to use a strip board in the first instance. With boards like this it just gets too messy and complicated not to.

I have priced the assembled and tested board at £180 plus postage to your country. Roms can be added on for an additional price or you can use your originals.

So i've been thinking about an RFM super mod for awhile now and it all came together on the bench last night...

The idea is that the rfm saucers will generate full rgb patterns and then tie in to the correct mode colours during each scene. See below for a quick testing video. It will take lamp inputs to
change the colour patterns for the scenes. (I am simulating that in the vid with wire inputs)

Here is a picture of the pcb that fits into the existing saucers with no modifications needed. 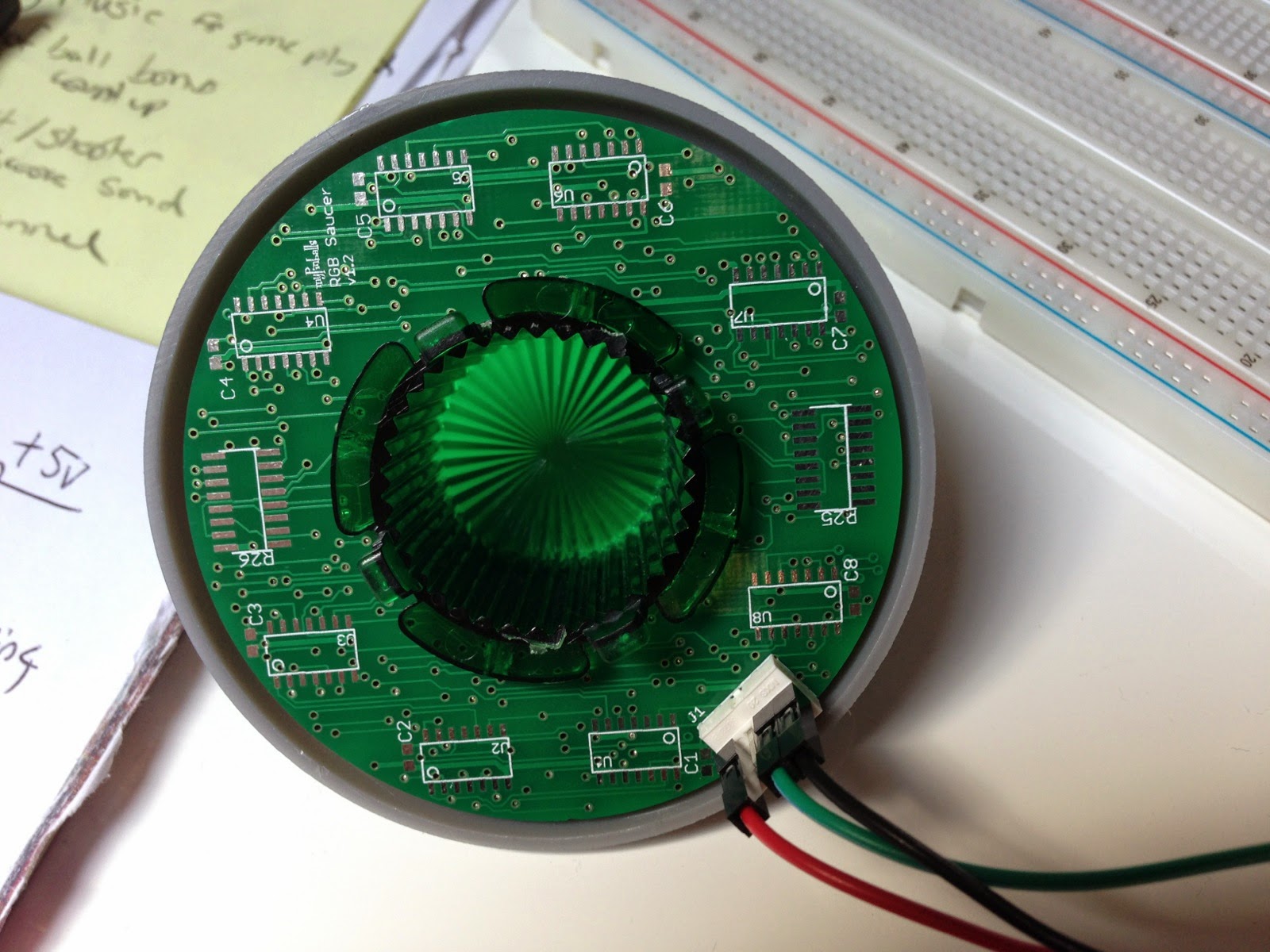 The kit will contain 2 assembled pcbs for the saucers and a controller board, which is driven from an arduino controller. I am thinking about setting up a github/code source area to release the controller code as open source so that others who buy the system can start to improve and modify the code, add new patterns, take it in new directions etc.
The whole kit will be 'a neat installation affair'. I am passionate about making super mods that look factory. There will be NO crocodile clips, NO loose wires to solder on. It WILL be all professional williams spec connections where it interfaces to the original lamp boards, or driver boards etc. (I am still experimenting with the best place to install the controller board and the cabling designs. More info on that later.)
Regarding the pricing. I am hoping to offer it for under £100 all in. This is not confirmed yet, but i don't want it to be massively expensive. We do live in reality though so i will see how we go. As with my other projects, i think they have been priced affordably.
The cabling coming out from each saucer pcb will be 3 wires. This is a serial design similar to how the AFM mothership led lamps worked and the helmet lamps on BoP. Recent advances in RGB LED technology (driven by LED TV's and advertising sign developments) have enabled simplification of the designs. Note the pcb in the pic has lots of unpopulated parts as i've managed to simplify it somewhat! I think 3 wires is the least number possible. :)
Posted by myPinballs at 09:40 2 comments:

Here's some of the latest videos i shot of the whirlwind custom software i've been working on.

So i decided to add an auto launcher to my custom whirlwind code rewrite using a selection of readily available parts. The benefits i think to a pinball game with an autolauncher are immense. You can do so much more and the software can be so much better.

Whirlwind has this nasty habit of letting an opponent steal your locked balls, so with an auto launcher you can stop that. Also with software settings you can enable or disable the control to for the purists about.

Using the stern kicking bracket and arm gives just enough room to allow the ball release mech to still function. Thanks to Scott for showing me his Earthshaker. This made is much easier to position