As i have produced 2 sound board remakes now i decided to write a test software program for my 2 bally compatible boards. The idea being that you can specify the board type in the program and it will then play the full set of sounds for you. I also thought of having an input where you can specify the sound id directly. I like this idea also for the purpose of using with some of my other projects such as my custom pinball controller and also for recording high quality samples of all bally sounds.


Whilst developing the software I came across something that was interesting whilst working out how to access sounds from later games like gold ball and xenon which are 7 segment games and use a larger 2732 rom. It also provides supplemental information on the tech information written regarding how the later sound boards (namely the Squawk & Talk) receives information. 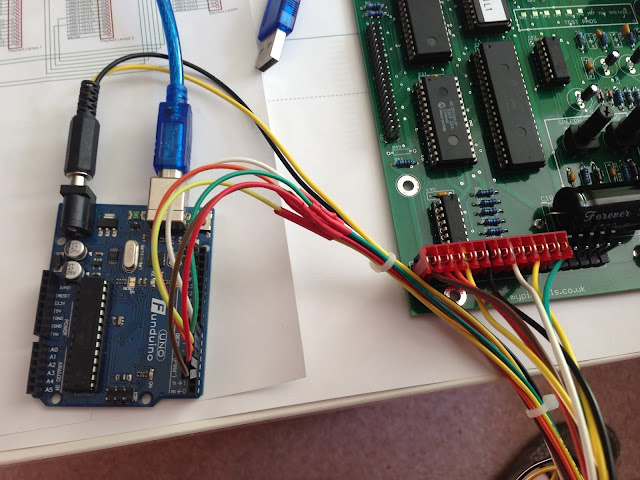 Before the 7 segment on Bally games was introduced the control line was using a sound address line 5 to allow upto 32 sounds to be played. When the 7 segments came out this line was then used to drive the 7th segment and so if the sound access program remained the same then only 16 sounds would have been possible. At this point I believe that the double 4 bit nibble process was introduced (yet to confirm this through tests though) to allow upto 256 sounds to be played. This would mean that this system was in place as soon as 7 segment games came out (Skateball onwards?) rather than from the introduction of the Squawk & Talk Sound board.

Also, as mentioned in the technical documentation by Clive Jones

"Strangely, the schematics that I'm checking against show a *fifth* solenoid select line wired to PA4 (if the "EE" jumpers are installed, which, we'll come to shortly) or IO4 of the PSG. Maybe Bally kept their options open by keeping this fifth solenoid select line available on S+T?"

The 5th select line is still connected on a S&T board, but on closer inspection of the manual schematics and wiring diagrams, this line is tied to ground through a looped connector so the signal is purely used on the display front here. Also on games such as Xenon the manual states sound address line 5 as Not Used. This rules out some sort of possible multiplexing for both signals, and i'm not sure how that would have even been possible with the current design.

I will update here with more information as i find it
Posted by myPinballs at 08:59 No comments: